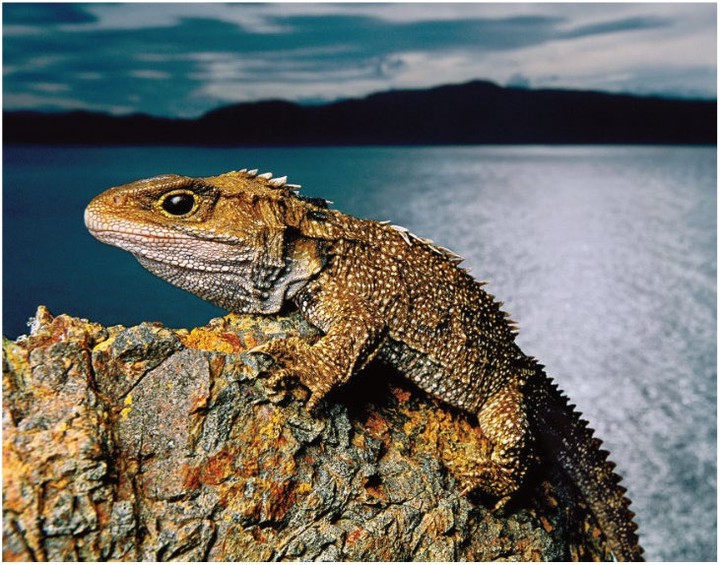 The tuatara (Sphenodon punctatus)—the only living member of the reptilian order Rhynchocephalia (Sphenodontia), once widespread across Gondwana—is an iconic species that is endemic to New Zealand. A key link to the now-extinct stem reptiles (from which dinosaurs, modern reptiles, birds and mammals evolved), the tuatara provides key insights into the ancestral amniotes. Here we analyse the genome of the tuatara, which—at approximately 5 Gb—is among the largest of the vertebrate genomes yet assembled. Our analyses of this genome, along with comparisons with other vertebrate genomes, reinforce the uniqueness of the tuatara. Phylogenetic analyses indicate that the tuatara lineage diverged from that of snakes and lizards around 250 million years ago. This lineage also shows moderate rates of molecular evolution, with instances of punctuated evolution. Our genome sequence analysis identifies expansions of proteins, non-protein-coding RNA families and repeat elements, the latter of which show an amalgam of reptilian and mammalian features. The sequencing of the tuatara genome provides a valuable resource for deep comparative analyses of tetrapods, as well as for tuatara biology and conservation. Our study also provides important insights into both the technical challenges and the cultural obligations that are associated with genome sequencing.

A commentary on the paper is available in Nature News and Views including comments on the genome repeat analysis that my work contributed to.